In this week’s Torah portion, the Israelites send emissaries into the land that God has promised them – a land, they have been told, that is flowing with milk and honey. When the scouts return from their mission, they bring back fruit and report that the land is fertile, but they also report that the land is inhabited by Nephilim. Nephilim is often translated as “giants,” because the scouts describe them as large and fearsome. Other sources call them “fallen angels,” ascribing supernatural prowess. “We looked like grasshoppers to ourselves,” they say, “and so we must have looked to them.”

The Israelites were not the first or the last Jews to experience Impostor Syndrome. As I begin preparing for my first High Holiday leadership experience, I am acutely aware of what it’s like to feel small, to feel unprepared, to feel like everyone else in the world I’ve dreamed of – the world of rabbinic leadership – is so much more qualified than I am. When I approach the pulpit, despite over 11 years of success in Jewish leadership, I just don’t feel like I belong there.

The funny thing is, a lot of my work centers on supporting others who feel like grasshoppers in a land of giants. I am the manager of the Springboard Fellowship, training, supporting, and mentoring early career professionals, many of whom are new to Jewish leadership, and new to work in general. They are zero to two years out of college, and they often don’t feel qualified to step up as Jewish educators. They, like me, compare themselves to rabbis, peers, or students who have a lot more experience and different skill sets than they do. A challenging thing about Impostor Syndrome in the landscape of Jewish leadership is that it’s not just about leading. It often comes down to an underlying fear that we are just not “Jewish enough,” whether it’s due to lack of knowledge and experience or Jewish “status” as determined by Orthodox law.

Whatever the reason, it’s tough to lead when we don’t think we have what it takes. What strikes me the most about the scouts’ statement is the simultaneous self-awareness: “We looked like grasshoppers to ourselves” – and lack of awareness: “So we must have looked like grasshoppers to them.” The scouts recognize their own perception, and it’s true that we can make anything into a self-fulfilling prophecy. But the scouts don’t understand that self-perception is limited. A couple of weeks after one of my grasshopper moments as a newer professional on campus, I came to my office to find notes of gratitude on my desk, in which my students described me as “a rock,” “great in a crisis,” and “a voice of reason.” I was shocked. The only giant that I had to fear was the one I had created within me – the one who told me that I was too small to make a difference.

I learned something else about Impostor Syndrome recently, from an article written by my colleague, Chris Harrison. Impostor Syndrome isn’t just about thinking I don’t have what it takes. It’s also an inability to celebrate my successes, to own my expertise. I do know my own strengths, but I tend to dismiss them. I tell myself these strengths are not as important as the skills I’m still lacking, and that my weaknesses will keep me from becoming the rabbi I want to be.

When have you felt like a grasshopper among the Nephilim of the world? When have you held back, keeping yourself out of the land of milk and honey because you felt too small to take part in it? What if the Israelites had owned the successes that led them to this moment, on the precipice of their greatest dream? They escaped Egypt, they received the Torah, they transitioned from slavery to freedom, they became a people. They made mistakes along the way – remember the Golden Calf? – but they learned, they grew, and they became. Their own fear was the only thing standing between them and the land of milk and honey.

When it comes down to it, we do have to face our own giants, even when we’re afraid. But that doesn’t mean we have to do it alone. When you have been scared to enter your own land of milk and honey, has there ever been a voice – your own or someone else’s – that reminded you to own your expertise? In my work, I have been fortunate to have phenomenal mentors who believe in me, such as my current supervisor, Josh Feldman. I’ve also been fortunate to be that voice for countless students and young adults. When I feel like a grasshopper surrounded by giants and fallen angels, I try to remember that if I’ve been that person for other people, I get to be that person for myself too, and I get to ask others for support when I need it.

You – and I – have everything it takes to face the giants. We do have what it takes to claim our place in the land of our dreams. My blessing for all of us in this week and in the weeks to come is that we learn to celebrate our strengths, own our expertise, and recognize our own potential. We may be afraid, but we are right where we belong, and together, we are unstoppable. Shabbat Shalom.

One thought on “Facing the Giants: Parsha Shelach” 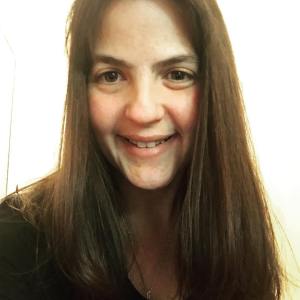 Welcome to my blog! I am a Hillel professional, a Renewal rabbi, and the Assistant Director for Milton Marks Neuro-Oncology Family Camp. I am a passionate prayer leader, pastoral counselor, ritual designer, spiritual guide, and writer. You can learn more about me here. Thanks for visiting!